Mr. Matsumoto brought practical experience as an in-house patent attorney for a leading manufacturer to our firm. His extensive background encompassed the application and intermediate prosecution proceedings of patents, utility models, design and trademarks appeals and patent validity cases, patent opposition cases, cases appealing trial decisions, license agreements, foreign patent applications, research and expert testimony on domestic and foreign patents, and in-house instructional programs on patent issues. His experience also includes one year of on-the-job training at a law firm specializing in Intellectual Property matters in the United States.
He always keeps in mind how best to give effective, strategic advice to businesses on gaining an edge that can be secured in the early stages of designing and developing corporate products by optimizing the utility of their existing intellectual property rights. He also advises companies on how strategies for patent applications in and outside of Japan. After clients acquire the desired patent rights, he further advises them as to how to make the best use of those rights and how to avoid infringing on other companies’ intellectual property rights.
While Mr. Matsumoto currently coordinates and handles major domestic and international patent litigation cases, he is simultaneously improving his litigation and dispute resolution knowledge.

• Patent infringement litigation in Japan
Mr. Matsumoto provided assistance to the attorneys representing the client, a machinery manufacturer, in patent infringement litigation filed against the client in Japan in relation to industrial machinery. In an invalidation trial, Mr. Matsumoto won a decision in-validating the opponent company’s patent. When the client filed an action for a declara-tion of non-infringement and invalidity of the opponent company’s United States patent in the United States District Court for the District of Columbia in response to the Japa-nese litigation, Mr. Matsumoto supported the United States attorneys. After obtaining results in a Markman hearing that found that there was no infringement, the matter was resolved entirely in favor of the client.

• Dispute over patent and know-how licensing agreement
In a dispute concerning a licensing agreement between the client, a Japanese automobile parts manufacturer, and a global automobile parts manufacturer regarding patents and know-how for vehicle safety parts, Mr. Matsumoto was the sole patent attorney in the Japanese team representing the client in international arbitration. From restricted dis-covery through intensive hearings to the conclusion of the matter, Mr. Matsumoto as-sisted the partner attorneys and contributed to a settlement satisfactory to the client.

• Patent infringement litigation concerning a European patent
Mr. Matsumoto acted as a Japanese representative assisting litigation activities by the representing German lawyers and patent attorneys in patent infringement litigation filed against the client, a machinery manufacturer, in the Düsseldorf Regional Court in Ger-many with regard to a European patent. He provided assistance by preparing supporting materials for non-infringement arguments for software patents in the regional court and for patent invalidity arguments in the federal patent court and supreme court, and by providing advice to the client from the partner attorneys. He contributed to a resolution by the finalization of a decision for the non-infringement of the patent and by the nar-rowing of the scope of rights, which rendered the patent harmless.

• Royalty auditing
When a licensee under a comprehensive patent license from a United States company was suspected of failing to pay royalties and required to undergo a royalty audit, Mr. Matsumoto supported the partner attorney in negotiations with the third-party auditor and responding to the audit on behalf of the licensee, a major Japanese semiconductor manufacturer. He contributed to a resolution satisfactory to the client.

• Opinion on patent non-infringement and invalidity
When the client received a warning that it was infringing a patent holder’s patent rights and a request that the client conclude a fee-based license, Mr. Matsumoto prepared an opinion on the non-infringement and invalidity of the patent and a draft request for an invalidation trial. He also supported the partner attorney in giving legal advice on strat-egies for negotiation with the patent holder.

• Preparation of a counterproposals to and advice on agreements
In a matter in which the client, a machinery manufacturer, concluded an agreement to receive patents and know-how from a foreign venture company and jointly develop and sell new products, Mr. Matsumoto prepared the counterproposals for the patent, know-how and trademark licensing agreement, supply agreement and supplementary agree-ments for the client at the stage of negotiations. He also supported the partner attorney in advising the client and negotiating with the other party. 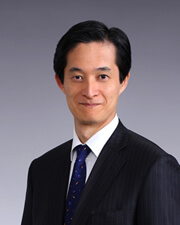 [Closed on Sat, Sun and holidays]